Thank you so much!!! The Minóy book looks amazing and I’ve just downloaded it, and I’m currently reading immersion into noise.

K: Most of your work has to do with data and sound, how much did your early days as La Monte Young’s archivist have influenced on this?

JN: My early interest in data and sound and image came from my involvement in the No Wave scene in New York City while archiving the Fluxus collection of La Monte Young back in the late-70s and early-80s. The No Wave Colab (Collaborative Projects) scene was wildly interdisciplinary: visual artists playing in bands, acting in plays and films, writing poetry and theory, shooting Super-8 film, video, sculpture and audio while hanging out together at Clubs like Tier 3 and The Mudd Club. During the No Wave period, I was also reading Nietzsche while studying philosophy at Columbia University. It was in that fecund atmosphere that I decided that I would strive to interweave the two major trends in the history of art: the Apollonian and Dionysian.

By fusing the loose chaotic freedom of No Wave with the structured minimal conceptualism of a La Monte Young, I aimed to fuse hot post-conceptual chaotic disturbance with cool conceptual data forms. My smooth gray palimpsest drawings from that post-punk period – and the slick photo-blowups of the drawings – were an attempt at situating art somewhere between the surface of cold conceptualism and the chasm of shattering incoherence of post-conceptualism, where we must each pick through the meshwork and recover figurative meaning out of entangled ground.

K: What kind of projects did you developed with Colab and which one was the most important for you?

JN: In the early 1980s, myself and many other artists, were interested in the distributive capacity of art based in reproduction. Most were inspired by a 1968 essay The Dematerialization of Art by John Chandler and Lucy R. Lippard, as it argued that Conceptualism had a politically transformative aspect to be delved into. The other inescapable text at the time was The Work of Art in the Age of Mechanical Reproduction (or Reproducibility) by Walter Benjamin. Important for my formation was when I produced the Colab sponsored show (with performances) simply called John Heartfield at ABC No Rio, held from November 1st to November 18th in 1983. Xeroxes and photomechanical blowups of John Heartfield’s (1891-1968) art, torn from a book, were the maquettes that I produced from. Reproductions of his anti-Nazi/anti-Fascist photomontages were wheat-pasted on the walls of ABC No Rio, walls that had been were painted a sinister black from top to bottom. I filled the space with audio collages by Bradley Eros and hit the streets with Mitch Corber, putting posters all over downtown: advertisements for the show along with powerful John Heartfield images.

It seems impossible to understand in our age of ubiquitous cell-phone photography, but no photos were taken of any aspect of the John Heartfield events (that I know of).

K: Why did you decided to start the Tellus cassette series and which is the importance for you of making data banks, in this case a casettography?

JN: As the vital New York downtown scene continues to melt into rich yuppie fat, preserving the work of cutting edge artists of all sorts from that place and time (80s) seems more than worthy. Happily UBUWEB has archived Tellus in digal form here: http://www.ubu.com/sound/tellus.html.

Tellus Audio Cassette Magazine was created in 1983 by me, curator Claudia Gould, and Carol Parkinson, a composer and staff member of Harvestworks/Studio PASS. We met for drinks to discuss my idea of a magazine on cassette that would feature interesting and challenging sound works. With the advent of the Walkman and the Boom Box, we perceived a need for an alternative to radio programming and the commercially available recordings on the market at that time. We then began to collect, produce, document and define the art of audio through publishing works from local, national and international artists. Sometimes we worked with contributing editors, experts in their fields, who proposed themes and collected the best works from that genre. Unknown artists were teamed with well-known artists, historical works were juxtaposed with contemporary and high art with popular art, all in an effort to enhance the crossover communication between the different mediums of art – visual, music, performance and spoken word.

K: How were your works and thoughts pushed during and after your work in Colab and which are de advantages and disadvantages of working collaboratively?

JN: I was influenced by Colab member Jenny Holzer and Colab associate Barbara Kruger. I was at the time photo-mechanically blowing up my small drawings, making Xerox books (Xerox was brand new at the time) and street posters. Even painting-centric artists like David Wojnarowicz, Walter Robinson, Justen Ladda, David Salle, Christof Kohlhofer and Anton van Dalen were examining reproduction and reproduction methods, like the silk-screen and stencil. Colab’s interests in Fluxus-like low-priced multiples (The A. More Stores and the Artists Direct Mail Catalogue – a co-production with Printed Matter), newsprint publishing (X Magazine, Spanner, Bomb), No Wave film production and screening, video and cable T.V. (Potato Wolf and the MWF Video Club), live art performance, audio cassette publishing and mail art distribution networks (Tellus Audio Cassette Magazine) have marked me for life. This all brought me closer to Dick Higgins’s intermedia approach to art.

K: Would you say that the work you produced after Colab, specially your  paintings, are collaborations with machines and computer viruses?

JN: Not really, as I do not give up control over them

K: How have you seen that computers have changed the way we work with data and information?

JN: I see computers and art as a means of practicing politics on one level. In the mid-1980s I could already observe the coming rise of electronic media (computational media, more precisely) as the controlling, organizing force of social power. I felt that to adequately address this topic I should approach it from inside of electronic medium, and not from an artisanal pre-electronic practice.

K: Which is for you the importance of data?

JN: Working as an archivist for LaMonte Young, meeting John Cage, and learning of the famous “9 Evenings: Theatre and Engineering” of 1966 that Robert Rauschenberg helped organize with the engineer Billy Kluver was salient to my formation in this regard. Rauschenberg understood that through the mediation of chance and machines, data can be contorted, thus changing our awareness of what technology is or can be.

K: Do you believe in Singularity and on Kurzweil’s idea of Spiritual Machines?

K: The Attractions of Cybism was never realized and is a key point on your work and art theories. What was it about? And is it important for you to keep it unrealized?

JN: Cybism is an art theory term I developed as a sub-division of viractuality at the turn of the century. I proposed the concept for an exhibition that never was realized, but the idea of Cybism was developed into a paper that I delivered at ECAM (Encuentro de Ciencia y Arte) in 2008 at the invitation of Juan Díaz Infante in Mexico City.

Cybism is a sensibility emerging in art respecting the integration of certain aspects of science, technology and consciousness – a consciousness struggling to attend to the prevailing current spirit of our age. This Cybistic zeitgeist I identify as being precisely a quality-of-life desire in which everything, everywhere, all at once is connected in a rhizomatic web of communication. Therefore, Cybism is no longer content with the regurgitation of standardized repertoires.

K: I understand viractualism as a term that has to do with our immersion into a work of art. However I believe Cybism, though it’s a division of Viractuality, is more about connection. How did the internet influenced you on both terms? Do you think they could exist without it?

JN: For me, viractualism and cybism is best understood as emerging from the vast incognizant digital totality of the internet within which we currently live; an immense digital assemblage-aggregate which in cybist manner is experienced as exceeding our usual sense of lucidity. 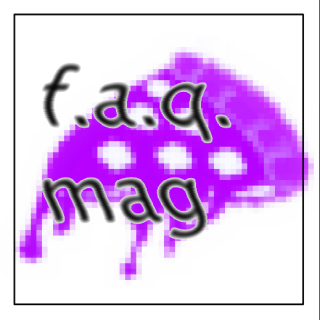 faq magazine is a weekly blog about art & stuff, mostly on the internet, updated usually on thursdays.